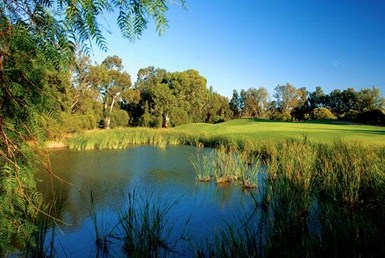 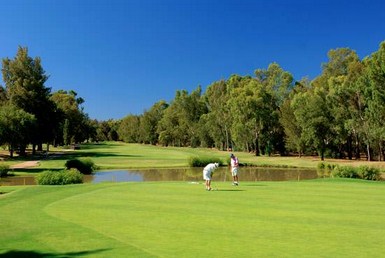 The Penina course created by Henry Cotton, is now a monument to his memory. Penina was the first course to be built in the Algarve and it was inaugurated by the President of the Republic in 1966.

The area used to be a rice-field and it is now surrounded by tall, wide-trunked, trees. Cotton used the drainage ditches of the rice-field to define fairways in some places, and hazards in others. He enlarged them at strategic places modifying their banks by raising them and concealing the water hazards from the less cautious golfers.

In front of the hotel, a  nine hole course called Resort course (ex - Monchique) was created later on, to satisfy the needs of more and more clients and to allow for maintenance on the main course. A small layout with very short holes for beginners, the Academia course, was also built, among the fairways of the Championship course.

The extensive driving-range is very well managed and there is also a huge putting-green with an area of about 1000 square metres, making Penina a superior quality practice centre. The par of the Penina course is 73 (35+38) with the second nine both beginning and finishing with two consecutive par 5's, which is not usual.

To close the first nine there is another hole over 400 metres long with a dogleg to the left and also a long double tiered green, well defended by three bunkers. The l3th hole, a 208-metre par 3 lies alongside a lake, with a bunker defending the right of the green, and is one of Penina's challenging holes.

send
Facilities
Customer reviews
Much improved in recent years, the tees and greens are back to their best. For the time of year they are hard to beat.
Despite some rumours to the contrary,for the time of year the course is in excellent shape with fast, receptive greens, well bunkered fairways and very well maintained. a credit to the staff.
Address